The way I figure it,

there are two kinds of people in this world--people who shine like the chrome on Old Glory, and people who are more like the rusted metal in McGunn's junkyard.  My entire life, I've been surrounded by people who shine, who have a special-something.  And starting tomorrow, I'm going to find mine.

Auggie's words from The Junction of Sunshine and Lucky

The Junction of Sunshine and Lucky

Below, you'll find two videos that describe what The Junction of Sunshine and Lucky is about.  The first is the "official" version, and the second is a video like Auggie would make herself.  Which do you prefer? 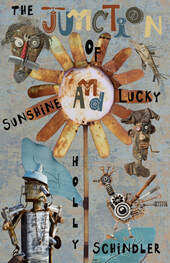 ~How Auggie and Gus save Serendipity Place and find their true calling.~

Auggie Jones thinks she’s an ordinary girl. She lives with her grampa Gus, a trash hauler, in an old house. And even though most of her friends live in the same poorer section of the town of Willow Grove, it seems like everyone has a “shine”—a talent or special ability. Everybody but Auggie, that is.

But winds of change begin to blow—a storm tears through Willow Grove, Auggie’s best friend ditches her for a new girl who lives in an upscale house on the well-to-do side of town, and the House Beautification Committee targets Serendipity Place, Auggie’s neighborhood, with fines and threats of demolition.

Auggie insists she and her grampa aren’t run-down people. She uses the items from Gus’s trash pickups to reinvent their house and convince everyone (including her old best friend) that she’s every bit as worthy of notice as anyone from the fancier side of Willow Grove.

Along the way, Auggie finds her voice, her ability to stand up to those in power, and uncovers an artistic talent that goes far beyond decorating her house. But how could a yard filled with items ready for the junkyard change an entire town’s idea of beauty? How can it save Auggie’s aging neighborhood? And how can rusted, recycled pieces of metal ever become Auggie’s special way to “shine”?

You can get your parents to snag a copy at Amazon. 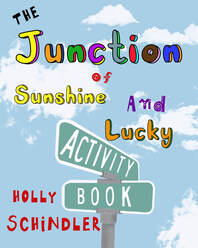 Did you read The Junction of Sunshine and Lucky? Did you cheer for Auggie as she stood up to the House Beautification Committee? Did you wish you were there with her, going to McGunn’s in Old Glory, coming up with sculptures you could create with Gus?

This activity book is filled with puzzles, pictures to color, and sculptures to finish. Ideas for getting involved in your own community. Ways you can become a folk artist yourself.

This book extends the fun of The Junction of Sunshine and Lucky. Makes the story last just a little bit longer. But in many ways, it’s also just the beginning of you finding creative ways to beautify your own world every day.

Ask your parent to get a copy at Amazon.

The Sounds of Work

Auggie learns in the book that beauty really is in the eye of the beholder...But "music" is also in the ear of the beholder!  Click the video below to listen to the sounds of Auggie and Gus making their latest sculptures.  (Sometimes, the sound of happy work is the prettiest sound of all...)  Watch the volume on this one, though.  Auggie's creations can get awfully loud!

Shining brighter than any star...